As this year slowly comes to an end, all I can say is, what an accomplishment for our organization. It has been a very busy year, at times even a little stressful.

This year we were able to host two small delegations from our Sister City Paderborn, once during the „Art on the Square event, and then shortly afterwards a small group accompanied by Dr. Otmar Allendorf, the Secretary, and Bernd Broer, the President of Paderborn SC. While they were here, we held our annual „Springdance“. Then in August, 14 young students, along with 2 chaperones returned safely from a three week stay in Paderborn.

Our Oktoberfest this year was a great success, of course thanks to the weather and definitely our good food.

If you were unable to attend our annual ‚Taste of Germany“ dinner, you just don’t know what you missed. Food and entertainment was great, and I am looking forward seeing all of you next year at the event.

Each year we present two awards to someone that has done an outstanding job in helping and supporting our organization. We are proudly announcing that the „Hermann Award“ went to Jay Tebbe from the News Democrat for his support in advertising for our dinner. The Membership Award went to the Ladies of St. Libory. They truly deserve this award for their help, especially for making the delicious potato salad for our Oktoberfest food booth. It is one of our best sellers, maybe we can bribe these ladies to make more next year. This year we have one more recipient, and that is Mayor Mark Kern, who received a Special Award for his support and dedication to the Sister Cities, especially when our German Friends are visiting. CONGRATULATIONS“ to all of you.

When I took over this position last January, I was very eager, but also knew that I still had a lot to learn about running an organization. But thanks to all the Board Members and Past Presidents for their advice and help, I have made it this far. You lose a few nights of sleep worrying if everything has been done right, or what is due next etc. So I have one good advice for our next President, President Elect Norma Bergkoetter, when this happens, get up, even in the middle of the night and write it down!!! You sleep more peaceful afterwards.

Thanks to our budget and fund raising efforts, we were able to give away two scholarships to students from SWIC. Now we have to say: „AUF WIEDERSEHEN!“

Two couples that have been a great asset to our organization have moved out of the area. Our Past President Karl Mandl and his wife Anna has moved to Florida. Their new address is 1605 Hovington Circle, Sun City Center, FL 33573. Karl has done a great job as President and also as a gracious host to both Mayors from Paderborn and Wayne and Marilyn Stumpf, who are moving to South Carolina. They have been with BSC for a long time. Wayne served several years as a Trustee, auditor and as member on the nominating committee, while Marilyn entertained us quite often with her Accordion at different functions. The Stumpf s have also hosted several times, and one particular time they kept an apprentice from a Bank in Paderborn here for three months. Martin worked during that time at West Pointe.

All of you will be missed, but we hope that you will always come back and visit your friends here in Belleville. Since they are moving to Florida and South Carolina, I have only one guess. They picked up Storm and Hurricane chasing as their new hobby.
Well, the holidays are just around the corner. Hope all of you have a joyful Holiday Season and a Happy and prosperous New Year and we extend those wishes to all our friends in Germany.

Dear Friends in Belleville and Around:

Dear Friends in Belleville and Around:

Fall has come with all its beautiful colors. We remember the visitors from Belleville who were here during the last months. First of all the Belleville youths with their chaperons Christy Klein and Rose Anne Renneker. Together with their German peers they had a great time. These exchanges play an important role in building understanding and friendship between our countries. Just a few days ago we had three Belleville residents visiting. John Shively who presently has a teaching job near Darmstadt and will return home in December had taken his friends Bob Heckenberger and Robert DeLaria for a tour of their sister city. They were quite impressed with what Robert Voss and Wilhelm Boekamp showed them on their walking tour although it was a rainy day… Rich Berkel who happens to be a classmate of Bob had arranged the meeting.

Former president of BSC Karl Mandl and his wife Anna were received at „Weinkrueger’s“ at the same day in the evening. They were staying with the Froetschel family. The stammtisch round came to welcome the guests who had moved from Belleville to Florida a few weeks ago.

In September the incumbent mayor of Paderborn Heinz Paus was re-elected with more than 60 % of the votes for another period of five years in office. He is really pleased with the congratulations he has got from Belleville.

Congratulations on your Taste of Germany Dinner which again had drawn a big crowd. We envy you the rouladen and the other delicacies… and the entertainment. We hope that the cookbooks we brought during our visit in May were a of some help.
We are looking forward to our Thanksgiving Dinner to which the members of the German-American Friendship Society Paderborn-Belleville will be invited.
Best wishes to all of you for the weeks ahead.

Visit our homepage on which this Newsletter will also be published :
www.dafk-paderborn.de 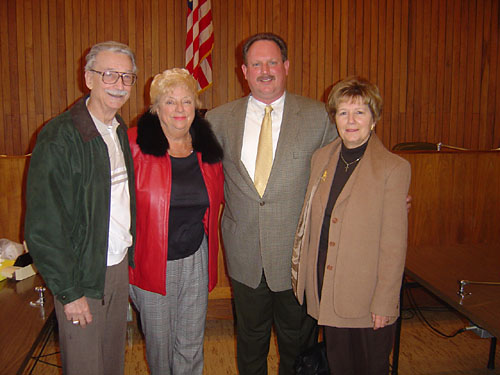